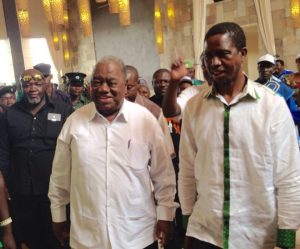 Rupiah Banda and Edgar Lungu arrives for a press conference

Rupiah Banda is the most immoral human being, ousted MMD president Nevers Mumba has charged.

Reacting to the election of Felix Mutati as MMD president at a convention held in Kabwe on Saturday, May 21, Dr. Mumba described the gathering as illegal, insisting that according to the party constitution, he is the legitimate party president..

Dr. Mumba further stated that that anyone who associates themselves with the the outcome of the convention will lower their standing in the eyes of the people.

“The gathering was an illegality. Our constitution clearly states that the party president signs off on the convention but that wasn’t the case,” Dr, Mumba said in an intervew. “Anyone who associates themselves to what happened in Kabwe yesterday only lowers their standing in the eyes of the people.”

On former president Banda whom he reconciled with a few days ago but graced the convention before quickly rushing to attend the PF campaign launch at Lusaka’s Heroes Stadium, Dr Mumba said: “If the reports I’m hearing are true, that President Banda was part of that illegal gathering, then he is the most immoral human being. This is a person I was reconciling with not too long ago so I don’t understand why he would do a thing like that.”