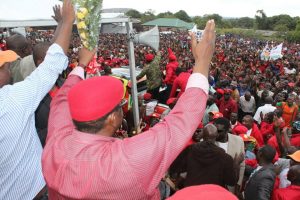 This is a matter in which Mwamba, 57, is being charged with two counts of assault, one count of malicious damage to property and one count of conduct likely to cause a breach of peace.

The UPND strongman is accused of having slapped two unknown marketeers and causing unspecified damaged to private property while conducting campaigns in Kitwe’s Chisokone Market.

But the former Defense Minister has denied all charges and the court has set June 24, 2016 as the date for the commencement of trial.