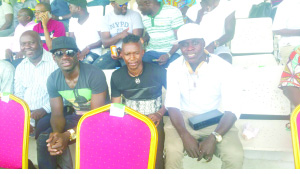 By NDINAWE SIMPELWE –
THE Chipolopolo preparations for the crucial must win Gabon 2017 Africa Cup of Nations (AFCON) qualifier suffered a setback after narrowly losing 1-0 to Togo in a  preparatory match played in Lome.
The defeat should act as a  wake up call for coach George ‘Chicken’ Lwandamina as he gauges his team’s readiness for the crucial Group E AFCON qualifier against leaders Guinea Bissau in a week’s time.
Despite missing about four first team players, three of whom watched from the terraces as they arrived hours before the game, Lwandamina went into the game with a hope of a positive result to help the team gain morale and confidence before facing Guinea Bissau.
But Togo with their talisman Emmanuel Adebayor leading from the front, were not going to disappoint the home fans.
However it was Mathieu Dossevi who plays for Standard Liege who made the difference when his individual brilliance was too good to handle for the Zambia defence in the 22nd minute firing home the only goal of the match.
Zambia tried to push for an equaliser with the Lwandamina resting Evans Kangwa for Salulani Phiri and Conlyde Luchanga for Lubambo
Musonda who limped off the pitch but the Claude Le Roy tutored side held firm to deny Chipolopolo any goal.
Zambia will now shift focus on the next friendly match on Monday against Gambia with the hope of getting a win.
The team will have a big boost for the Gambia game as skipper Rainford Kalaba, goalkeeper Kennedy Mweene and midfielder Chisamba Lungu joined camp yesterday.
Delegation leader Blackwell Siwale confirmed that the trio arrived a few hours before kick-off and could not be featured but are expected to be available for the next friendly against Gambia on Monday.
Kalaba, Mweene and Lungu watched the Togo match from the terraces. The coach is now waiting for the arrival of Kabaso Chongo and Nathan Sinkala to complete the team.
Meanwhile, Siwale expressed satisfaction with the performance of the team despitethe defeat.
He said the Chipolopolo were highly competitive and put in everything to get a positive result which was a positive sign ahead of the Guinea Bissau clash.
He further thanked the Togolese football association for the opportunity to play Zambia adding that the hospitality was good.