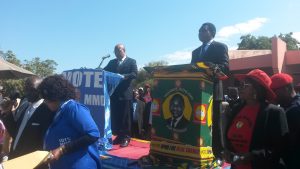 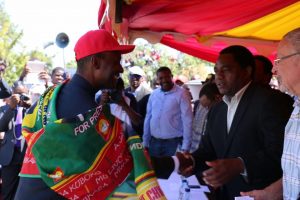 Chainama Hotel has become one of the places associated with revolution and regime change in 2016. No matter what side of the political spectrum you’re on, we are all agreeable that it has seen more politicians walking down the podium, denouncing their previous political parties and  Immediately they adorned in their newly –found party regalia and they flash a forward symbol. Opposition United Party for National Development-UPND is the hosts and recipients of different politicians from narrowed rivers namely: – the Movement for Multiparty Democracy – MMD, the ruling Patriotic Front- PF, Forum for Democracy and Development and other smaller parties.

Chainama hotel also witnessed the signing of electoral Memorandum of Understanding between the United Democratic Front- UDF and just recently the Nevers Mumba led faction of the Movement for Multiparty Democracy. Both agreements laid the UPND as the leader and flag bearer of their “alliances”. Undeniably the UPND is one party which has received more prominent politicians in the time under review than any other party. The senior members of PF like Dr Guy Lindsay Scott, Mulenga Sata and many others have indeed boosted the morale of the opposition party.

However the UPND’s competitors have trashed those moving to the opposition party as non-factors and bitter leaders who have natural hatred especially for the incumbent. The argumentative point therefore has been bordering on what aspects do we look at in given politician for us to conclude if they are factors or not. For us to engage each other in a level headed debate of factors and non factors, we must look at the preceding events where senior politicians, veterans and other stake holders endorsed, supported and rallied behind a given political party.

In 2006, during the burial of the late UPND leader, Mr. Anderson Kambela Mazoka, Former President Kenneth David Kaunda openly declared his support for the United Democratic Alliance, a consortium of three political parties comprising UNIP, FDD and UPND. This was undeniably a huge landmark as Dr Kaunda is a godfather of Zambian politics. However the UDA lost terribly. Despite it being the joint of three major parties comprising of more than 60 sitting MPs altogether in the previous parliament. From 2006 straight to 2008 elections, the Patriotic Front saw big endorsements after the death of Levy Mwanawasa,  MMD was in shambles thrown in the succession disputes between Rupiah Banda and Ng’andu Magande.  Yet the MMD narrowly beat PF to secure RB’s victory the term he carried through up to 2011. The Patriotic Front remained resolved and united hands with the now strong opposition- UPND, to create an electoral pact, which didn’t materialize but still with so much endorsements and commitments from other stakeholders.  PF managed to secure victory in 2011, though hard work, continued engagements with voters and the resolve to keep morale, recruit foot soldiers to market the party.

What then can I say about Chainama?  Chainama fever is very good for the UPND, it has created the confidence, the morale, heightens and amplified environment.  But this fever alone coupled with the few politicians who have crossed over the other side doesn’t make the UPND the categorical winners of these years’ elections. I won’t divulge in who is a factor or non-factor. It’s very extraneous, irrelevant and immaterial for any politician to clench the fist and claim to be the darling of the people. Therefore the issue of factors does not arise. The important stakeholder in an election is a mere electorate, it’s from that single vote that any candidate can be  branded  a factor, minus that we shall all sit here and debate of who is bigger in this game or not.

Nevertheless, if the UPND utilizes every member they receive to the maximum in each and every single person’s special abilities, then I can assure them of a sweet victory. Otherwise the Chainama school of politics will end up being a sheer political rhetorical with no backbone to sustain and win an election, merely good at making statements and sometimes some vulgar which goes like, “The fake Dr is fat like a pig”. Between now and the 11th August, UPND must mount on the campaign, utilizing every person they received side by side with old members in realizing the chainama dream or else Chainama will just be another time waster.