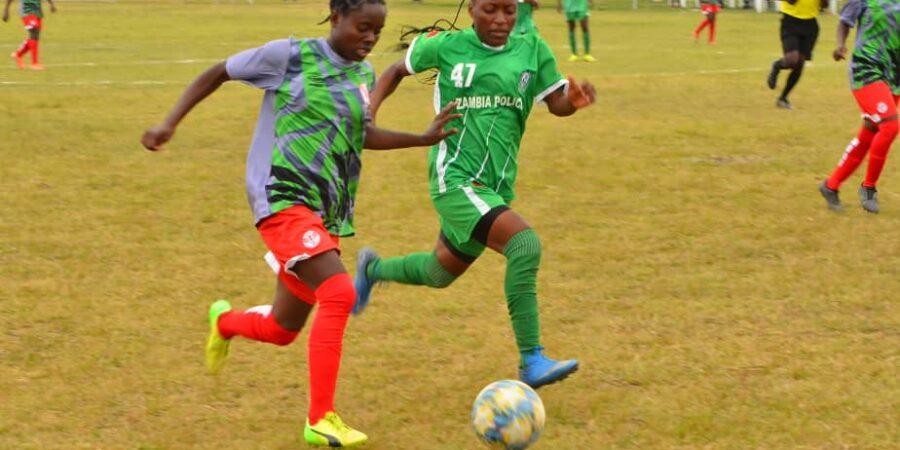 Football Association of Zambia (FAZ) Women’s Super League second round got underway this weekend with several mouthwatering encounters and interesting results recorded in all the four games played in match week 14 while ZESCO Ndola Girls maintained their stay at the top of the log standings after they defeated Queens Academy in a rescheduled Match Week 7 played at President Stadium.

Lusaka Dynamos Ladies Football club recorded a hard-fought 2-1 victory over Nkwazi Queens in a game that was played at NASDEC Sports Complex in Lusaka.

The Elite Ladies captain Xiomara Mapepa opened the scores in the 19th minute heading home from close range after benefiting from the cross.

However, Nkwazi Queens equalized three minutes later through Dorothy Daka who was found in free acres of space after a well-taken free-kick from Naomi Mumba with Chitete Esther Munsaka left with no chance after she came out of her line to level the scores.

The Elite kept pushing and their hard work paid off almost at the half-hour mark with a beautiful long-range stunning goal out of the 18-yard box from Eunice Namfukwe to send back the Elite in the lead with a 2-1 Scoreline going at the break.

The second half did not have so much action as the business was done in the first half and the final score was 2-1 to Lusaka Dynamos Ladies.

In a lunchtime kick-off at 13:00hrs in Ndola, Indeni Roses completed a double over Bauleni United Sports Academy (BUSA), Queens, after a 2-1 victory in a game played at Indeni Roses Sports Complex.

Women’s Under-20 defender Thelma Phiri opened the scores for Indeni before Grace Kamanga added the second goal in the second half to make it 2-0 for the coach Wisdom Kaira drilled lasses.

BUSA’s second-half substitute Regina Chanda scored the consolation goal for the Bauleni based side as they succumbed to a 2-1 loss at the hands of Indeni.

In another lunchtime kick-off at 13:00hrs, Queens Academy lost 2-1 to ZESCO Ndola Girls in a rescheduled week 7 encounter which was played at Kabwe’s President Stadium and beamed live on ZNBC TV3 and televised on Top Star Decorder.

ZESCO found the back of the net through Mary Banda and Happy Pinto while Queens scored through Evelyn Tembo to make it 2-1 to Zegalicious a result which pushed the coach William Zulu drilled lasses to 27 points on the summit of the log standings.

At Independence Stadium, ZISD hosted National Assembly and it was the Parliamentarians who took an early lead through Donaria Simaundu finishing off a great assist from Felistus Phiri to make it 1-0.

However, ZISD came back more organized in the second half and it was Esther Chikondi Phiri with an excellent long-range shot arguably the goal of the weekend leaving Agnes Banda in goal for Assembly with no chance as the final score ended 1-1 and this was Assembly’s 8th draw of the season while it was the 3rd draw for ZISD which is the second back-to-back draw.

It was a good day at the office for YASA who have also done a double over Dove as Patricia Lampi’s second-half strike from a free-kick was enough for YASA who won 1-0 and another defeat for the Fearless Dove.