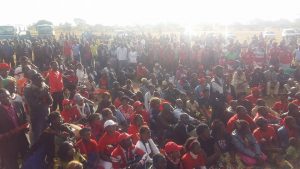 The opposition Rainbow Party over the weekend launched it’s campaigns for the August 11 general elections.

While other political parties were launching from big cities, Rainbow decided to launch from a rural area with peasant farmers as a symbol of the party’s ideas of socialism ( party for the peasants and poor of this country).