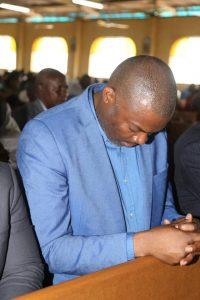 Former Lusaka Province minister Bowman Lusambo has sued Mercy Cowham, the woman who claims that he fathered her three children while the fourth one is yet to be born.

The PF Kabushi MP is seeking damages for libel and an order that a Deoxyribonucleic acid (DNA) test be conducted to ascertain the parternity of Mercy’s children whom she has insisted belong to the bulldozer.

In a statement of claim filed in court, Mr Lusambo stated that Cowham on September 28, 2021 published through a video footage circulated on Facebook by Prime TV and other online media houses to the effect that he has been in a relationship with her for about eight years and fathered three children with her and she is expecting another one.

In the said video, Mercy alleged that Lusambo abandoned her and his children.

He stated that the words or sentiments expressed in the said video in their ordinary meaning, mean and were understood to mean that he has committed adultery for the last eight years.

Mr Lusambo stated that  Mercy’e sentiments also meant that he was engaged in sexual activity with her on several occasions, resulting in him fathering four children whom he has abandoned thus being irresponsible.

The former minister stated that the sentiments are injurious to his reputation and lower his estimation in the eyes of right thinking members of society more so that he is a public figure.

“The words contained in the said video footage were published and continue to be published to the wide population as the video was found to be sensational and thus it went viral. The said sentiments were maliciously published by the defendant with her full knowledge that they are unfounded, false and injurious to the plaintiffs’ reputation,” the claim read further, demanding damages for libel, exemplary damages, retraction and apology of the statements in question.

Me Lusambo has also asked the court to order that a DNA test be conducted.