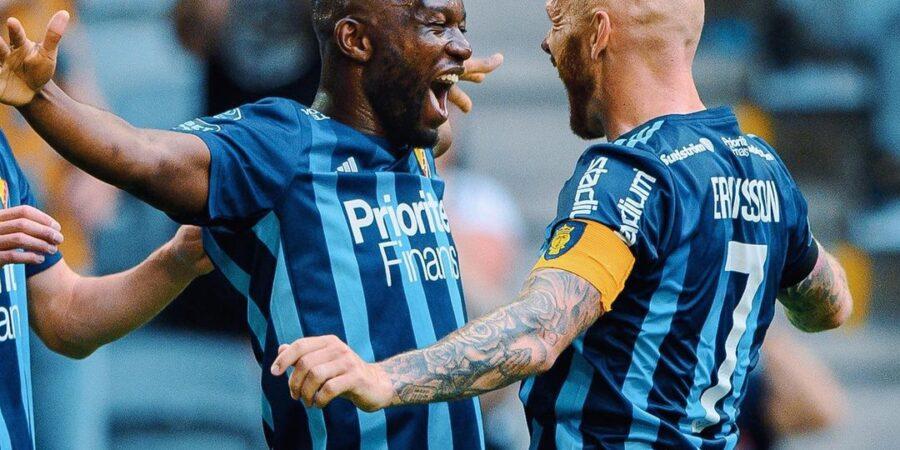 Zambian duo of striker Edward Chilufya and midfielder Emmanuel Banda was on target for Djurgadens IF on Monday afternoon as they run riot and beat IK Sirius Fotboll 5-1.

Djurgadens welcomed Sirius to the Tele2Arena with around 7000 fans back in the stands, there was an electric atmosphere from the word go.

Jacob Une Larsson opened the scores in the 21st minute as he nodded home a Magnus Eriksson free-kick to beat Hannes Sveijer in the Sirius goal.

Five minutes later, Edward Chilufya sprinted loose on the right-wing and drove into the box before setting up Hampus Finndell who made no mistake, 2-0 in favor of the hosts.

It got from bad to worse for the visitors two minutes later as Eriksson’s long-range effort took an awkward bounce in front of Sveijer beating him for Djurgadens’ third of the match. It was almost 4-0 by the half-hour mark but Edward Chilufya somehow missed from very close range with the goalkeeper already on the floor.

He made up for the mistake minutes later as he got on the end of a beautiful Elliot Käck cross to make it 4-0 before the break.

In the second half Coach, Kim Bergstrand decided to introduce Midfielder Emmanuel Banda in place of Finnish midfielder Rasmus Schüller. Sirius pulled one back in the 72nd minute through Christian Kouakou but Banda restored Djurgadens four-goal  cushion three minutes later as he headed in Eriksson’s beauty of a cross, 5-1 the match ended.

Djurgadens are third on the log with 21 points, five adrift of log leaders Malmö FF who have played two games more. Next up for Djurgadens is an away meeting on Sunday against Kalmar FF at Guldfågeln Arena.