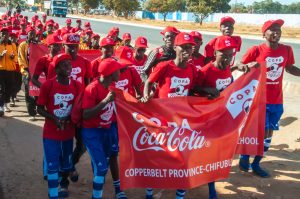 The 2016 COPA Coca-Cola schools football tournament kicked off at the Olympic Youth Development Centre (OYDC) in Lusaka this week.
The competition, which drew over 450 schools from around the country, saw ten secondary school teams qualify for the finals this week, with each province represented.

There are two groups in the competition with five teams each and the two teams that will qualify from the groups will play the final slated for Saturday, July 9, 2016.

The first game of the tournament saw Mwavi Secondary School, representing Lusaka, facing off against Muchinga Secondary of Muchinga Province in a one-sided derby that saw Mwavi clinch a 3-nil victory over their oponents.

The draws for the competition were conducted last Thursday (June 30, 2016) morning at a media briefing held at the Zambian Breweries offices in Lusaka.

The competition has received wide support, with endorsement and sponsorship from government through the ministry of education tourism, and corporate help from title sponsor Coca-Cola.

COPA Coca-Cola is the premier grassroots football tournament sponsored by the drinks brand in partnership with the Zambia Schools Sports Association (ZASSA) and the Ministry of Education. The initiative commenced in 1993 with only 100 schools participating and has now grown to include 450 government and private schools in Zambia.

“At Coca-Cola, we recognise that we cannot have a healthy and growing business unless the communities we serve are healthy and sustainable. As a global beverage company, we have committed ourselves to improving the quality of life in the communities where we do business,” said Zambian Breweries Managing Director, Annabelle Degroot.

The sponsorship covers prize money, transport and logistics, accommodation and meals for teams and officials, kits and other Coke branded clothing, soccer balls, hire of football pitches and payment to referees.

The best 13 players during the finals this week to form the country’s COPA Coca-Cola team that travels for international camps for ten days.
In 2015 Chizongwe were crowned champions following a thrilling final at the Olympic Youth Development Centre (OYDC) in Lusaka. The Eastern Province team beat 2014 runners-up, Chongwe High School 4-1.

As part of its Live for a Difference commitment to communities, COPA Coca-Cola promotes an active, healthy lifestyle while fostering teens’ interest in soccer. The tournament offers youth an opportunity to meet and interact with peers across the country as well as other nations. The programme also provides opportunities to recognise rising soccer talent among community youth.

In order to broaden their exposure and heighten their aspirations to become “the best of the best” in football, Coca-Cola also leverages its unique association with FIFA to give the young stars a once-in-a-lifetime experience to watch an international match live.

Across Africa, COPA Coca-Cola is played in 23 other countries that include Kenya, Uganda, Tanzania, Ethiopia, Angola, Mozambique, Malawi, Botswana, Namibia, Rwanda, Congo, Swaziland, Nigeria and South Africa, Lesotho, Madagascar, Mauritius and Burundi. Outside the continent, COPA Coca-Cola is also played in the Americas, Europe and Asia and is in a total 64 countries over 1.3 million players.