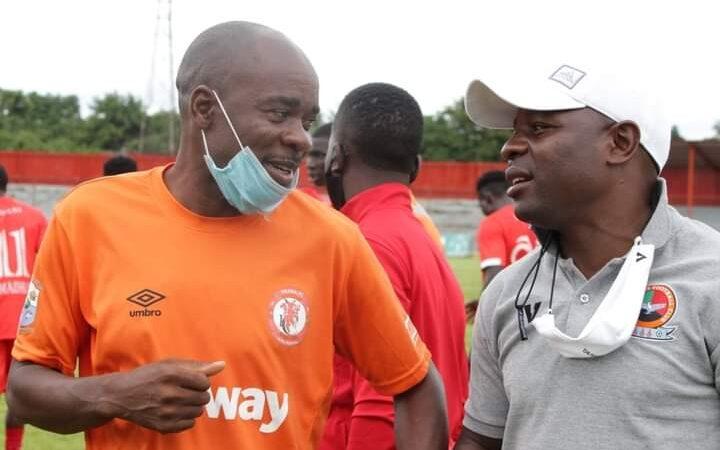 Zambia’s envoys in the CAF Confederation Cup, Nkana football club got their group stage campaign back on track after back-to-back wins against Namungo Fc of Tanzania.

A Fred Soutra Tshimenga second-half strike was enough to see the Zambia Super League defending Champions claim all three points in the reverse fixture at Levy Mwanawasa Stadium on Sunday while Diamond Chikwekwe scored in the other clash away in Tanzania.

Nkana head coach Kelvin Kaindu said the game was very tough and he went on to say that Namungo were tactically superior in the first half.

“First of all, I think it was not an Easy game I think Namungo FC came and were tactically superior to us in the first half you saw how they defended, and for us to have played 45 minutes without getting a goal was putting us under a lot of pressure but at the end of the day we managed to get the three points. We made some changes, we also changed our approach slightly better in the second half we probably pushed most of the game in their half and we managed to get a goal from the substitute but it was not an easy game. I think today they looked very organized, the way they played, I think they probably studied us, how we play, they looked very compact and they were very stable also in the first half,” Kaindu said.

Kaindu is hoping his team can replicate their CAF Confederation Cup form in the league where they have struggled and last won a game in February.

“First of all the game was not easy, our approach has been different when you see us play in the Confederation Cup and the way that we are playing in the league we have a slightly different approach in the Confederation and we are struggling very much in the league it’s the same team that played on Wednesday we are using the same team because of the number of games that we have, but the way we approach the league game and the confederation is different and for us to have picked up another three points we are still waiting for north Africans as they play we are hoping that Pyramid can drop points we be at par, we still have our home game to play maybe it can give us an advantage but for us to have pushed 6 points, I think we labored for it and we just hope for the best and of we can content what we have and if we can replicate the attitude that we have in the confederation probably we take it in the league game as well,” Kaindu told the ZamFoot Crew.

Meanwhile, Namungo head coach Amed Morocco was very proud of his boys’ efforts despite the loss.

“First of all we would like to thank God that we finished the game, it was a hard game, I think for both sides we played well in the first half we created a few chances we did not use them, we came back in the second half, Nkana showed why they are strong with experience, they pressed us in our area that’s why we made a lot of mistakes and after they got a chance they used it so that is football but I am happy for my boys still they continue to improve we are not doing well but we are continuing to manage the game we continue to move so hopefully for the future we will get a good squad,” he said.

“As for Namungo, I think we are going back home we prepare ourselves for the other games, We gain a lot of experience so that we use it for the other games that’s why am saying for the future we will have a good squad. Nkana has a good squad they have experience and there are playing differently. Today they were strong so what I say I wish the coach all the best for the future,” he added.