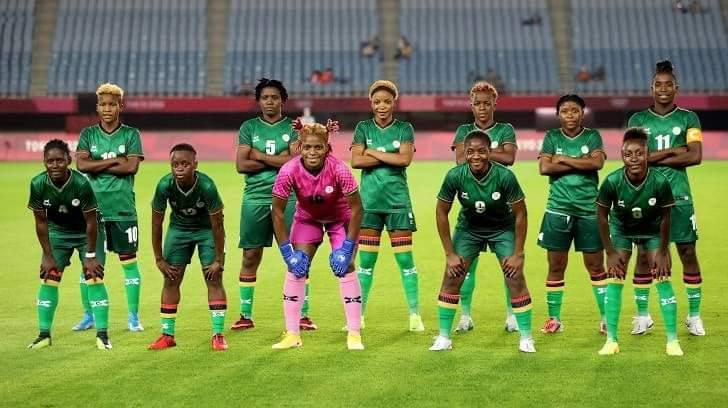 Zambian Women’s National Soccer team were handed a 10-3 thrashing by the fourth highest-ranked team in the World, The Netherlands at their debut Olympic tournament.

The Copper Queens lined up a 4-2-3-1 formation against the Netherlands 4-3-3 formation but here are some tactical observations, As the ZamFoot Crew breaks it down.

The High line made the difference

While many soccer fans blamed coach Bruce Mwape for having played a high line, Zambia managed to contain what could have been a catastrophic scoreline if the Netherlands women were left to play their offensive style of football.

The high line was meant to try and play in their opponents’ half but the Netherlands’ efficiency utilized the spaces between the defending block and the goalkeepers’ line.

Sticking to the plan, the Shepolopolo style

During the qualifiers, Shepolopolo played possessive soccer and attacked as a unit. The teams’ ability to shoot around the 18 yards left their opponents unsuspecting of what was to come. That is the Shepolopolo we know but panic swept in after a Hazel Nali error with the team failing to hold on to possession and kept pumping long balls to skipper Barbara Banda.

The long balls meant the Netherlands who had the height advantage over our players dominated Possession.

Despite the error, the Shepolopolo shot-stopper showed why she was recalled going into the tournament with fine saves that made the difference.

Her ball distribution was on point and was unfortunate to have conceded 10 goals against a very clinical Orange Lionesses’ side.

Shepolopolo skipper Barbra Banda rose to the occasion and showed class netting three for Shepolopolo becoming the first African footballer to have scored a hatrick at the Olympics.

Barbra looked deadly whenever she held the ball and created chances for her compatriots.

The goals were also the first for Zambia making her the only female football player from Zambia to do so.

Despite the loss for the Copper Queens, The ZamFoot Crew gives Coach Bruce Mwape a 4/10 rating. Carrying the hopes of a continent was not going to be easy but one thing that coach Bruce Mwape got right was cutting out the Netherlands from expressing themselves as a team.

His defense may have conceded 10 but they seemed to have played according to instructions, yes they could have done better.